This policy study presentation aimed to widely publicize the regional policy designer fostering project that Kyushu University has been working on through industry-academia-government collaboration, and the resultant specific policy recommendations regarding regional social issues. It also had the goal, through the format of a panel discussion regarding the creation of an innovation ecosystem, of illustrating the roles of universities in responding to societal needs, and was held as a part of the Japan Association of National Universities’ symposiums on university reform. The symposium was participated in by over 200 people including attendees from the Kyushu business sector, VCs, university stakeholders, policymakers at central governmental agencies, local government authorities and others. Six groups gave research presentations on the themes of the sharing economy, healthcare business, IoT/AI and robots, and the resolution of regional issues through new tools such as social business. A lively question and answer session ensued between central government agency policymakers and leaders, and VC commentators. During the panel discussion there was also a debate about innovation ecosystems with the involvement of figures from different industrial, academic and governmental backgrounds including a former prefecture governor, social entrepreneurs, and those with experience of fostering university-launched ventures. The symposium enabled the university to widely publicize its enthusiastic stance regarding regional contributions. 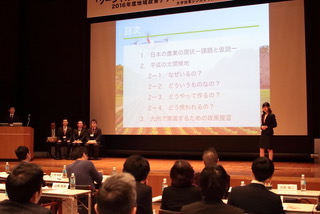 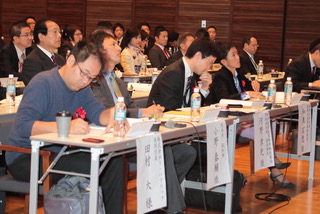 QREC and Faculty of Information and Electrical Engineering, Graduate School of Information Science and Electrical Engineering, Kyushu University decided to partner with Faculty of Business Studies, the University of Dhaka, to make further use of ICT research and entrepreneurship education toward solving problems in developing countries through social businesses. Professor Shibli Rubayat UI Islam, Dean of the Faculty of Business Studies, University of Dhaka visited Kyushu University with around ten other colleagues and on September 29, 2015, a Partnership Commemorative Symposium was held at the Kyushu University Ito Campus. When considering solutions to the various issues faced by developing countries, sustainable solutions using business techniques bring better results than old-style financing and support alone. One such approach is so-called social businesses, and many large corporations in Europe and America are getting involved. As well as changing the lives of people in developing countries for the better, they also present an opportunity for companies to benefit from huge markets. In other words, social innovation in developing countries is being realize in the form of business. In addition, many young people including university students are getting actively involved. QREC has also been active in support. In the symposium held after the signing ceremony by representatives of both universities, eight lectures held three sessions with discussions from several viewpoints. The lecturers included educators and researchers from the University of Dhaka Faculty of Business Studies and educators and researchers from Kyushu University involved in this field. They focused on how the love of challenge of young people and ICT can be used for innovation in developing countries. There was a lively exchange of opinion, and it was a valuable event for all who took part.

On March 21, 2015（Sat.）, in conjunction with the 10th QREP Final Presentations, QREC held the 2014 Asia Round Table on the theme of ” What Can Fukuoka Learn from Silicon Valley? ” At the round table, Co-founder and Chairman of Blue Jay Energy, Inc., Mr. Hiromu Soga ーwho has provided support for business start-ups and has had the experience of actually starting-up a business in Silicon Valley ー presented a keynote lecture on “My Method for Utilizing Silicon Valley: From My Experience Starting-up a Business in Silicon Valley. ” Mr.Soga lectured vividly on various topics, including the actual conditions for starting-up a business in Silicon Valley, differences between the mindsets, decision-making processes, sense of urgency of people in the United States and Japan, the actual situation regarding land fostering ecosystems creating win-win situations for all players, as well as background stories about the negotiations he had with Mr. Steve Jobs, the co-founder of Apple Computer when selling his company. The students have been inspired by his lecture based on his personal experience, which was followed by a lively discussion. In addition, a talk session including Kyushu TLO Company, Limited Adviser Mr. Tsuyoshi Sakamoto Fukuoka Center for Overseas Commerce in America（FCOCA）San Francisco Executive Director Mr. Ryuzo Nakaya, was also conducted under the theme of “What Can Fukuoka Learn from Silicon Valley?” ーproviding a catalyst for audience members to think about various things that can be done in Fukuoka City, which has been designated as a National Strategic Special Zone for Global Startups and Job Creation.
On the same day, final presentations were made by Kyushu University and Waseda University students participating in a week-long training program in Silicon Valley under the Entrepreneurship Program（QREP）on the theme of “Major Strategies for Expanding Japanese Businesses Overseas Learning from Silicon Valley.” The students made presentations on their impressions of Silicon Valley, how they had been changed by experience, and the business plans they worked on as part of group work activities. Following the presentations, the students received valuable advice from the instructors, and they appear to have been further inspired. 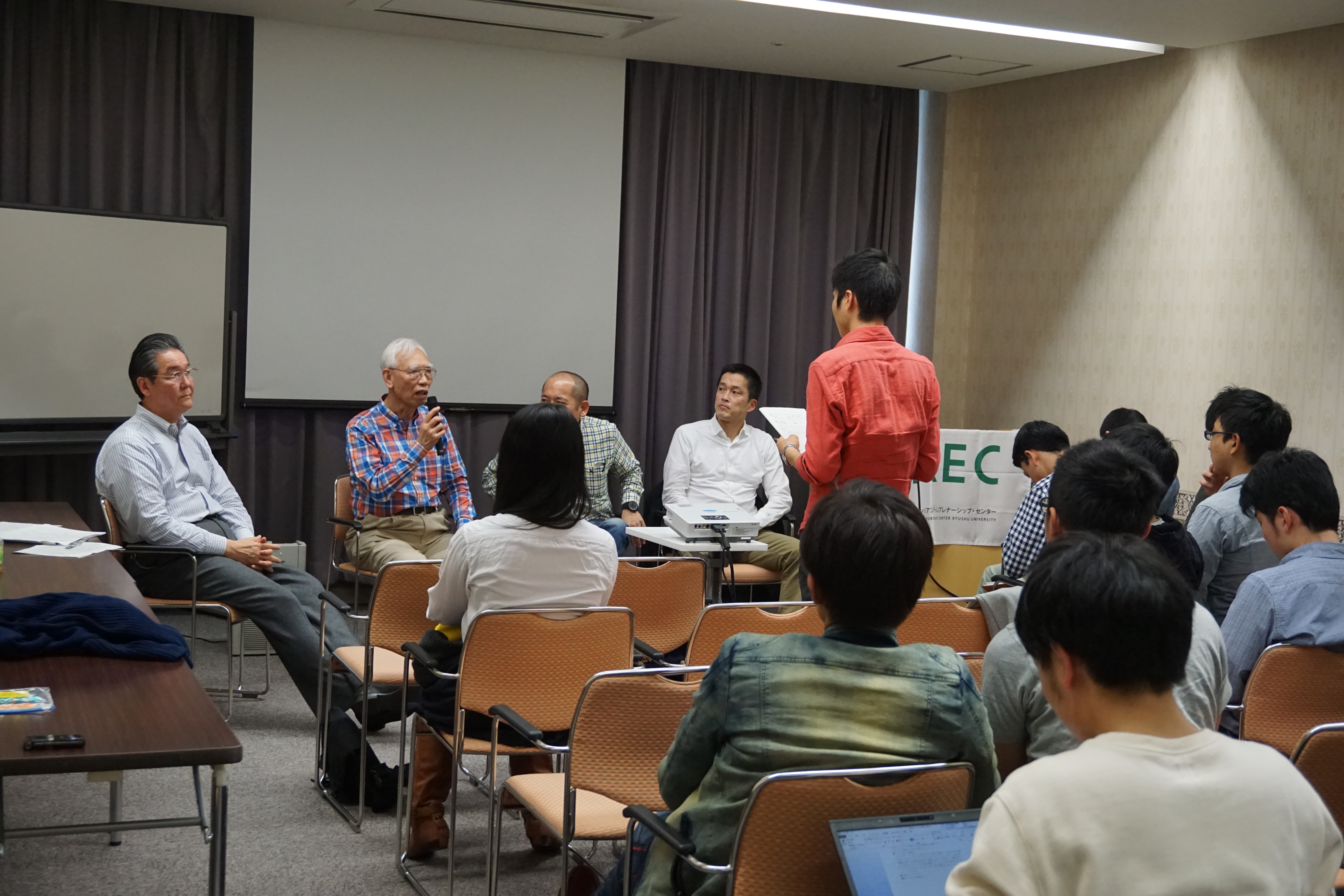 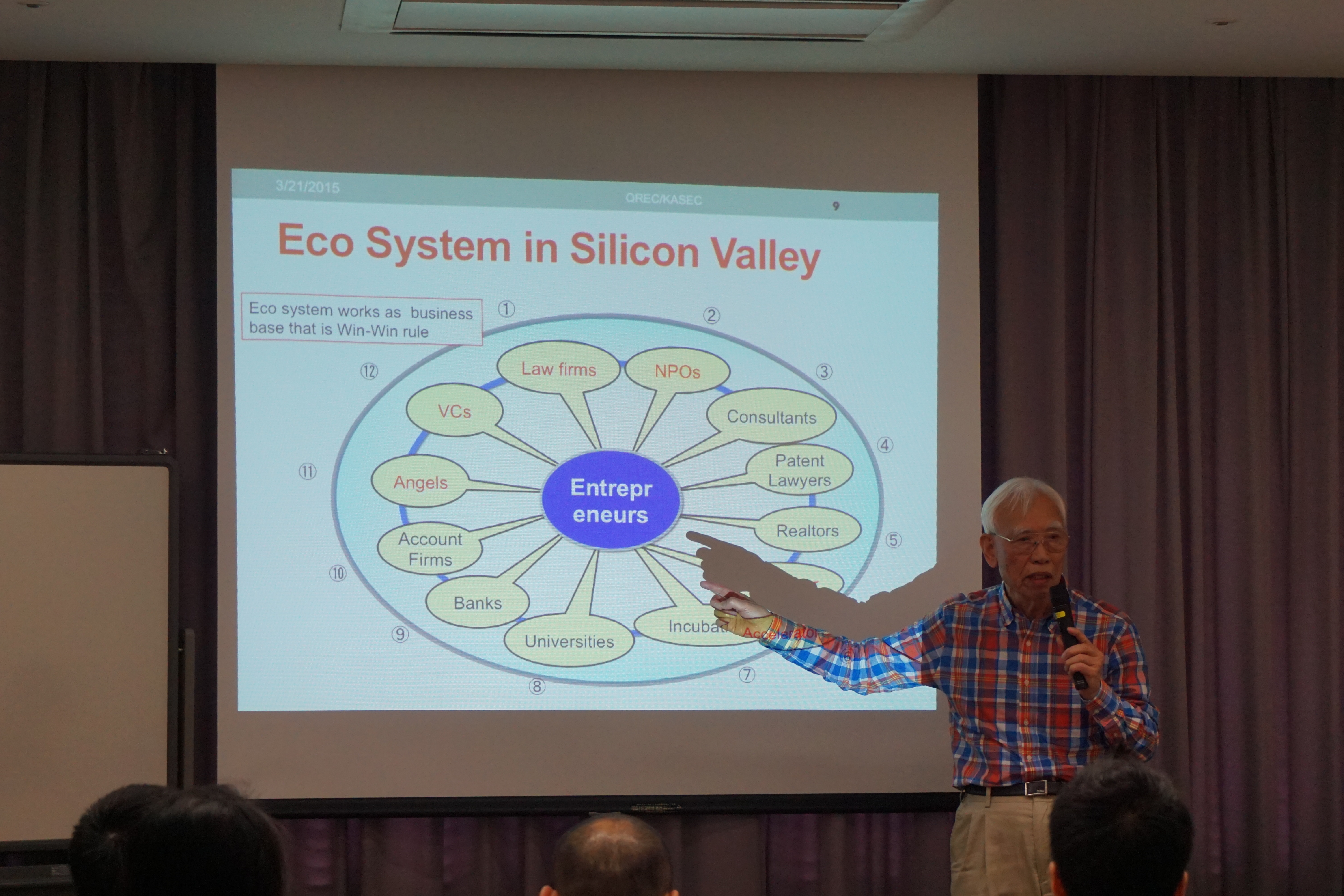 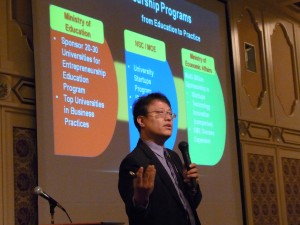 QREC and the Art, Science and Technology Center for Cooperative Research, Kyushu University (KASTEC) invited Dr. Yuichi Iwaki, founder and President and CEO of MediciNova Inc. (Professor at the University of Southern California School of Medicine) to speak about his company’s growth trajectory since its establishment up until the present day, as well as the form of bioventure growth strategies and how to be an entrepreneur.

“Are Japanese the Least-most Adventurous People in the World?

—Learning from the Success of Wakyo (Overseas Japanese Entrepreneurs)—”

Japanese entrepreneurs who have established and are expanding businesses in Asia (Wakyo) were invited to participate in a discussion of the importance of attempting global-scale challenges, including establishing businesses overseas, as well as entrepreneurship in Asia and the United States. Presentation by Kyushu University and Waseda University students participating in QREP was also held.

In 2012, QREC held various events, including the Brown Bag Lunch Seminar, under the co-sponsorship of the Public Affairs Section of the U.S. Consulate Fukuoka. The Three-Day International Workshop included lecturers from the US, Sweden and Singapore, a workshop on the methods of KFP and IDEO, and an Asia Roundtable on the Great East Japan Earthquake. 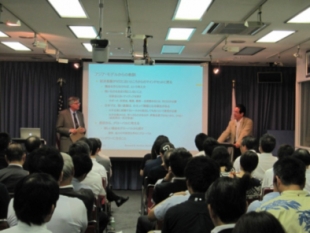 “Can Kyushu Learn from Asian Dragons?”

In the context of a sluggish global economy over the past several years, emerging economies in Asia have been maintaining high growth. It would not be overstating to say that Asia is now the engine of the world economy, and that this is the era of Asia. is said to be the center of the world economy. Dr. Richard B. Dasher, Professor at Stanford University and Director of the US-Asia Technology Management Center,
has been conducting research on the founders of Asia’s high-tech corporations and their support networks, and QREC invited him for a seminar focused on the latest trends in high-tech ventures in Asia, the background to their growth,and what Kyushu and Fukuoka should learn from them. The seminar was jointly sponsored with the Fukuoka American Center.

-Learning from advanced examples in the West and Asia-

QREC invited three practitioners of advanced entrepreneurship education for a three-day workshop and seminar held in Fukuoka and Tokyo. Invited were Dr. Boo Edgar, Director of the Gothenburg International Bioscience Business School (GIBBS) in Sweden, Dr. Norris Krueger of Entrepreneurship Northwest in Boise, Idaho, in the United States, and the Max Planck Institute for Economics in Jena, and Dr. Poh-Kam Wong, Director of the National University of Singapore (NUS) Entrepreneurship Centre.

The event was an attempt to provide opportunities for rethinking the form that entrepreneurship education should take in Japan, and discussion was directed to the question of what kind of entrepreneurship education should be practiced, depending upon the circumstances in the country or region. QREC organized it as an international event held over a three-day period. On the first day, a public symposium was held in Fukuoka, and on the second was a workshop for students. On the third day, the venue moved to Tokyo where a seminar was held for educators. 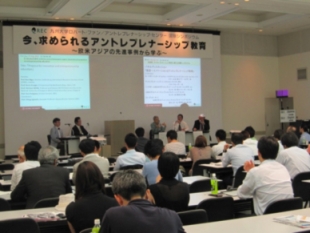 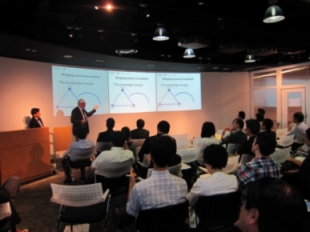 “How do we develop new business and design innovation?”

A seminar and a simulated class on creating new business were organized through QREC collaboration with the Kauffman Fellows Program (KFP), an influential entrepreneurship education support organization in the United States with an established reputation in innovation education and global human resource education. Cooperation was also obtained from IDEO, one of the top design and consulting firms in the United States. 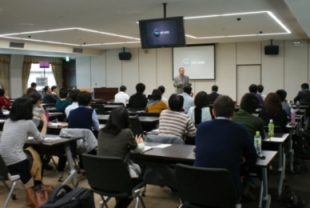 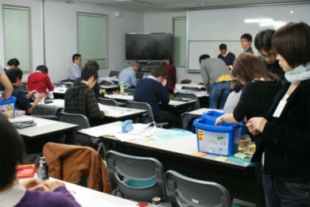 “Developing Technology and Services to Deliver to People in Developing Countries”

-Let’s plant a seed to change the world together-

There are large numbers of people in the world who suffer in poverty, unable to access water, medical care, and other such necessities of life, and even though the technologies exist, it is difficult to provide products manufactured to suit local needs because awareness of the needs and ways of life of those people is lacking.
See-D is an organization that was established to develop products that contribute to the resolution of issues faced in developing countries by joining the technological capabilities of Japan with the needs of developing countries.
QREC obtained the cooperation of three members of See-D, and See-D President Ken Endo, in holding a workshop to consider what echnologies and services (appropriate technologies) are needed in developing countries. 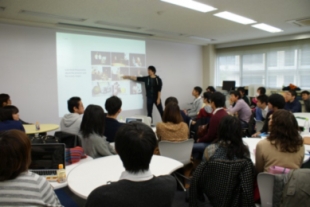 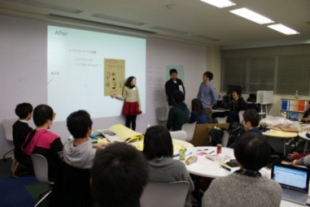 Two years have passed since the Great East Japan Earthquake of March 11, 2011. Four representatives of organizations engaged in volunteer activities, students, university professors, and others who have taken roles related to reconstruction in disaster areas presented reports intended to give a deeper understanding of trends in local reconstruction and recovery in disaster-stricken areas, fresh perceptions of ircumstances there, and on what is required for the creation of new business as well as for community development, and related matters.

The reports were followed by discussion, and the event was productive of thinking about desirable patterns of regional revitalization and regional creation for all areas including Kyushu, not only the Tohoku region.

Students at Kyushu University hold events every year that are open to the general public.

In 2011, such events included a brown-bag lunch seminar presented courtesy of the Stanford University Center for Social Innovation and an Asian roundtable on the Great East Japan Earthquake. 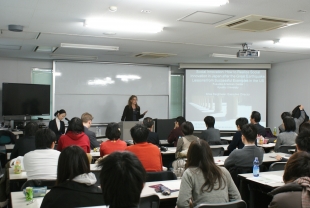 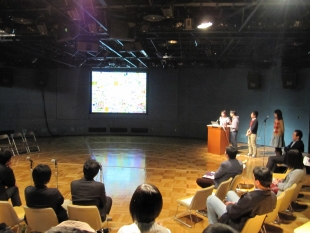 “No Looking Back: Creating a Region with Vitality for the Future”
– East Japan Trial Studies Aimed at Creating a New Region from the Ashes of the Great East Japan Earthquake –

Under the heading of “No Looking Back: Creating a Region with Vitality for the Future (East Japan Trial Studies Aimed at Creating a New Region from the Ashes of the Great East Japan Earthquake)”, in an effort to implement a regional model that surpasses what existed prior to the disaster that occurred on March 11, 2011 in the northeastern part of the country, which sustained major damage, guest speakers consisting of Tohoku University students, professors and general incorporated associations – who are all active in relief efforts on the ground at the site of the disaster – were invited to participate in a keynote speech and presentation.